A new approach for wound care with a smart molecule

It is a new generation smart molecule. It has to be the “first choice” in the treatment of chronic wounds and burns.

Polyhexanide (PHMB) is a strong cationic, polymeric biguanide derivative. It shows a broad spectrum of activity and high tissue compatibility.

Polyhexanide is a raw material known since 1959, which is used in cosmetics and food industry. Other capabilities are in cleaning and disinfection of beer plants or as a disinfectant and anti-flock substance in swimming pools (no smell of chlorine).

In 1995 polyhexanide could also be used for the manufacture of wound dressing solutions. The first major application area were surgical wounds. Soon, the solutions produced in the hospital pharmacies were used in the treatment of infected chronic wounds.

Polyhexanide has an incredible advantage over other microbicide substances: it has the highest therapeutic ratio (TB). In other words, the relationship between the benefit and harm is mostly on the benefit side.

Polyhexanide is odorless, colorless and hypoallergenic. It does not cause inflammation on wound or cause wound healing disorders according to current knowledge.

• Reduces wound pain rapidly and effectively [1,2]
• Reduces wound malodour [2]
• Increases formation of granulation tissue [3]
• Increases keratinocyte and fibroblast activity [4]
• Reduces scurf formation within the wound [3]
• Reduces MMP-induced periwound breakdown [5,6]
• Helps to remove non-viable tissue [7]
• The success of PHMB has resulted in its recommendations as the primary antimicrobial in many European countries [8] and has prompted the publication of a UK consensus review [9]

Polyhexanide does not directly affect the body. It does not accumulate in cells or tissues and is not absorbed by them. Polyhexanide, however, binds tightly to the cell wall of bacteria. It permanently damages and weakens bacteria even at very small concentrations. For example the therapeutic ratio for Staphylococcus aureus is 25’000 in contrast to 500 for the therapeutic ratio for PVP-iodine or Octenidine with 3.2 or for Chlorhexidine with 0.9. (Table I).

How does it support wound healing?

The basic principle of wound healing is that wound care products should not block cell function in wound healing. However, the feature of many conventional wound care products is the damage to both bacteria and human cells. While polyhexanide damages the bacteria, it does not destroy the structure of healthy human cells and has no toxic effect on them. The basic evidence for this is the investigation of keratinocytes. A study with polyhexanide keratinocytes * showed that keratinocyte production increased at a concentration of 0.2 micrograms / ml. Polyhexanide accelerates wound healing even at very low concentrations.

The basic principle in wound healing is non-blocking of the wound healing cell functions. While polyhexanide damages the bacteria, does not destroy the structure of the healthy cell and does not have any toxic effect on the cell.

The basic proof of that is the study on keratinocytes. In a study of polyhexanide keratinocytes*, it is shown to increase keratinocyte production at a concentration of % 0.02. [10]

The most outstanding effect of polyhexanide in performed studies is its antimicrobial activity against resistant bacteria such as multidrug-resistant Staphylococcus aureus (MRSA), vancomycin-resistant enterococci (VRE) and Acinetobacter. [11,12]

*Keratinocytes are cells which form the largest part of the epidermis and which are responsible for keratin synthesis in the stratum corneum or hair sha. Keratinocytes occur in the basal layer of the epidermis and reproduce by mitosis. ey produce lipids, the ‘Natural Moisturizing Factor’ (NMF) and keratin when they are located on skin surface. In this process, keratinocytes atten, lose their nuclei and die. In later stages, these cells are known as corneocytes.

Poloxamers can be used therapeutically in wound cleaning, irrigation and some pharmaceutical industries such as eye drop formulations and in treatment of kidney stones.

In dermal irritation and tenderness tests, poloxamers have negative results.

Their removal out of the body is rapid and there is no risk in growth and/or development toxicity and carcinogenesis.

The use of poloxamer-based non-ionic surfactant gels as carriers for antibiotics and antimicrobials has been strongly supported, based both on the sustained localisation of antimicrobial activities (because of the gel’s viscosity) and the ease of removal when compared with common clinical clips.[13]

Poloxamers have an accelerating effect on cell repair processes, regardless of the type of injury. They have been used to reseal thermally injured cells and chaperone the functional recovery of heat denatured proteins. Confirmatory in vivo studies have shown that the application of poloxamers to burn wounds increased blood flow and reduced burn depth.[14]

Why is poloxamer used as a surfactant?

Polyhexanide tends to express its properties only when it is used with the amphoteric and non-ionic surfactants in wound healing conditions.

According to European Union Regulation (EC) no. 66/2010, the usage restrictions are put forward because the recycling of surfactants and their toxic levels on creatures are higher in nature.

According to the current legislation, some problems are emphasized in terms of biodegradability of cationic and amphoteric surfactants (including amphoteric alkali betaines) in aerobic and anaerobic conditions.

Actolind® w Solution/w Gel contain a Polyhexanide-Poloxamer combination that has an excellent cleaning effect and is well tolerated by cells. Due to the modified surface tension, the formulation also reaches areas where water cannot penetrate. In this way, it penetrates the deepest areas and provides much better effect than classical antiseptics. Bacterial residues and other wastes do not remain on the skin in contrast to other antiseptics and they are safely removed from the wound.

Poloxamer reduces the surface activity on wound surface and facilitates the removal and destruction of biofilms, dirt and necrotic tissues. 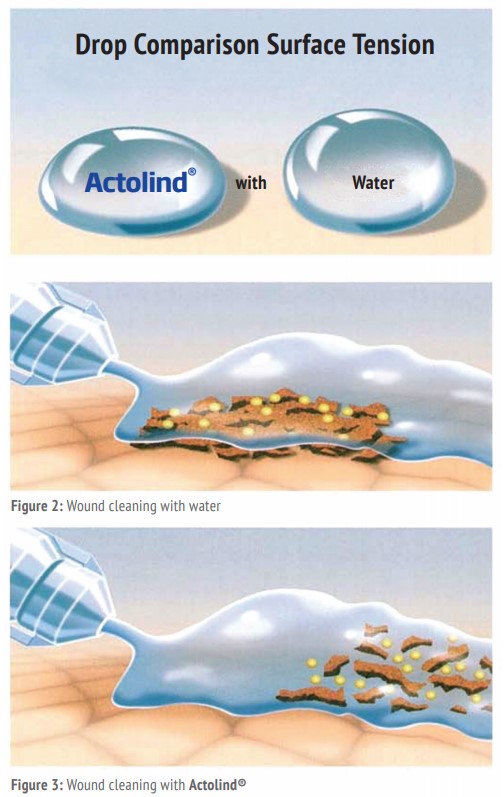